Another spectacular offer in the July Deals collection of HorseDeals 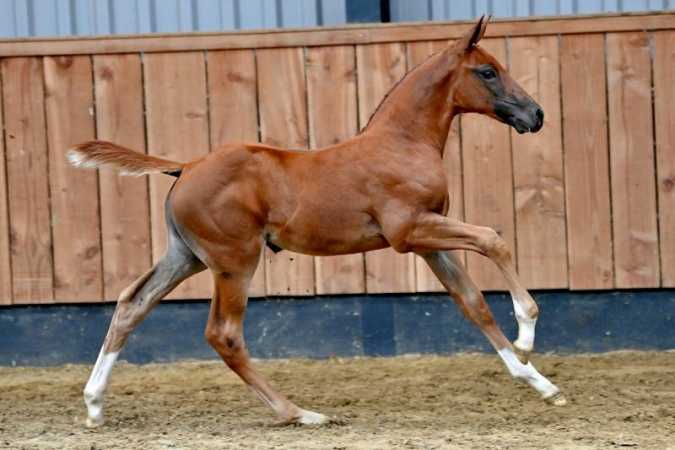 Starting today July 19th, you can bid on the July Deals collection on www.horsedeals.auction. The more than 100 lots are once again a spectacular collection with, besides the frozen straws, also 10 foals, 10 implanted embryos and 4 frozen embryos with which the very best genes can be obtained.

Also Dominator Z delivers a filly for this auction, HorseDeals Princess Impressive, in combination with none other than Prima Donna van 't Roosakker who directly goes back to the famous dam line of Usha van 't Roosakker.

Rolex GP already has a promising name and considering his pedigree there is a big chance that he will live up to it! His sire is no one less than Chacco Blue and his dam Julia GP is a daughter of top-class sire Toulon.

HorseDeals Princess Out of the Ordinary is a granddaughter of Chacco Blue via Chacfly PS and is out of Notre Dame van 't Roosakker, who was born out the combination Echo van 't Spieveld x Kashmir van Schuttershof. Notre Dame shows a lot of talent under Remco Been and is building her international career, following in the footsteps of granddam Electra van 't Roosakker.

Among the embryos (expected in 2022), there are some exceptional opportunities with e.g. the combination of Dominator Z and Azuela de Muze who has several descendants jumping at 1.60m level; as a daughter of Narcotique and granddaughter of Qerly Chin this should not come as a surprise!

Also the mare Vera Cara (by Casco) has well performing offspring like the 1.60 GP jumping Appy Cara. In this embryo Chacco Blue signs for the paternity so that also on the father's side the world's best genes are represented. A second Chacco embryo is the one out of Andrea who herself jumped 1.60!

The embryo Carthago x Elvis ter Putte comes from a half-sister of Bamako de Muze and Mylord Carthago, and thus from the maternal line of Fragance de Chalus.

So there are many interesting deals to be made in this July Deals collection!
Bids can be made until 26 July at www.horsedeals.auction.