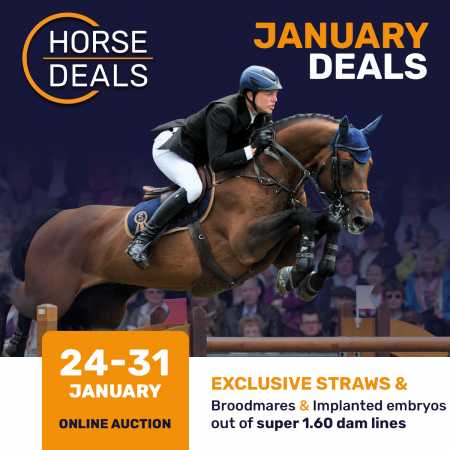 Yesterday evening the January Deals had their final. The online auction of HorseDeals.Auction was again very successful with a lot of (new) interest from abroad

Unique in this auction was the broodmare Cigale de Muze ( Taran de la Pomme x Vigo d'Arsouilles), who is the full sister of El Torreo de Muze! This grey mare was sold for an amount of € 29.000 and was the auction topper of the evening. Cigale will move to Hungary.

At the auction of the straws the number of bids was again enormous with buyers coming from all over the world. The original straw by Chacco-Blue was as usual the top price and will remain in Belgium for € 27.000.

We also saw an exceptional straw in this collection, namely that of Carthago! The straw of this legendary stallion was sold to Germany for € 23.000. The straw of Mylord Carthago was also popular and was sold for € 18.000 to France.

The frozen embryos of Chacco Blue x Kallgirl de la Pomme and Chacco Blue x Prima Donna van't Roosakker were both sold to the same buyer in Poland for an amount of € 6.750.

The HorseDeals team is grateful for the trust of all the breeders who bid and wishes its clients every success in breeding. We are looking forward to the next online auction during the March Deals from March 21-28.

Horsedeals: January Deals are closing in a few hours!
Pre-order your embryo now via HorseDeals