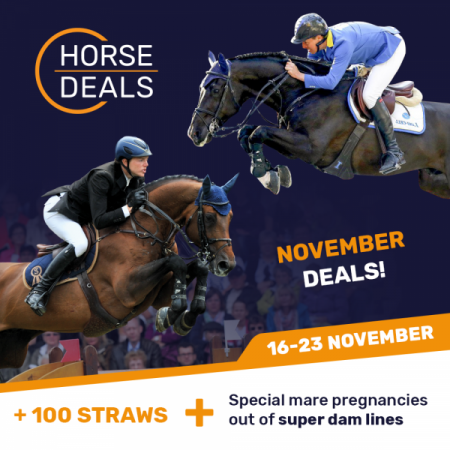 The November Deals collection which closed yesterday was the most extensive HorseDeals online auction so far. Of the more than 100 lots, the original straw of Chacco Blue was again the price stopper, it goes for €28,000 to Belgium. For €14,000 the straw of Dominator Z will remain in the Netherlands.

Ireland eventually won the bidding duel for Conthargos with a final virtual hammer blow of €6,250. The straw of For Pleasure remains in the Netherlands for €5.000 and from Great Britain €4.800 was bid for Diamant de Semilly. The foundation sire Contender was represented in the collection for the first time and this straw goes for €3.600 to Italy.

With the embryos the Dutch and Belgian bidders left the ones from other countries behind, because they all stay in our area! Most expensive was the expected filly of Chacco Blue x Prima Donna van 't Roosakker that was sold for €32.000 to a buyer from Belgium. For €28,000 the mare embryo of Chacco Blue x Iluna de Muze stays in the Netherlands, and also the third most expensive one stays here - that was the Cumano x W. Delta Mossel Jantje which got to a final price of €19,000.

The HorseDeals team is grateful for the trust of all breeders who have bid and wishes its customers every success in breeding. We are already looking forward to our next online auction during the November Deals.

Auction:
November Deals: NO TERMS, all straws are free for ICSI as well!