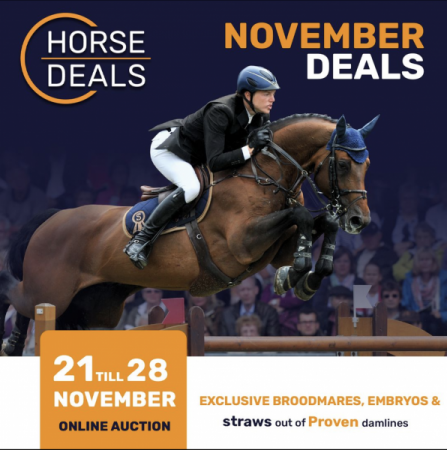 There was a lot of interest in the embryo of Darry Lou x Charade de la Roque (Coltaire Z x Nabab de Reve). Charade is a daughter of Walloon de Muze and granddaughter of the legendary Querly Chin. She is also the half-sister of Centa de Muze and Toupie de la Roque. The embryo was sold for 16.000€.

The embryo of Diamant de Semilly x Carthana di Magico Z also caught the eye and was also auctioned for 16,000€. Carthana is the full sister of Carthina Z, who is the dam of Emerald van't Ruytershof, Diamanthina van't Ruytershof and Nixon van't Meulenhof! In this dam line we see a lot of Grand Prix showjumpers.

A buyer from Italy secured the embryo of Chacco Blue x Lageena Hero for €13,000. Lageena Hero is a daughter of Echo van't Spieveld and is the full sister of Mystic van't Hoogeinde, who became world champion in the 6-year-olds in Lanaken.

Most of the collection consisted of straws, several remain in the Netherlands and neighboring countries, but there were also buyers from Spain and the United Kingdom.

The HorseDeals team is grateful for the confidence of all the breeders who participated in the auction and wishes its customers good luck in breeding. We are already looking forward to the next online auction in January.

Spectacular range of embryos in November Deals
Horsedeals is ready for the first auction of 2023!