Horsedeals: May deals are closing in a few hours! 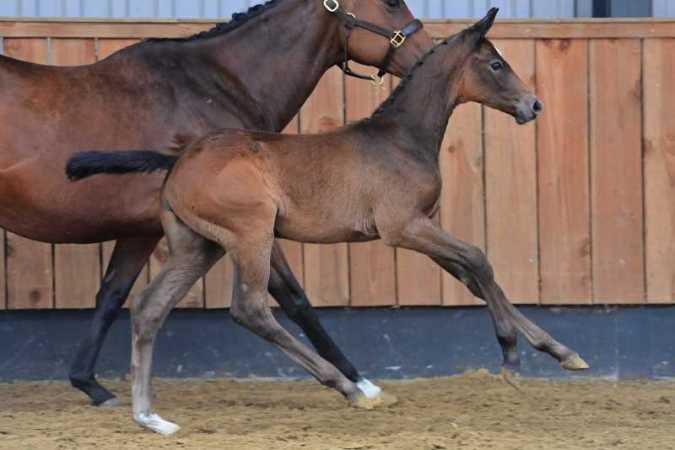 Tonight, 30 May, from 8 pm onwards, the May Deals collection on www.horsedeals.auction will end. So these are the last hours that you can bid on the 14 exclusive foals, young horse, broodmare and the +90 straws of top stallions!

Chacco Blue of course cannot be missed and is represented four times with the foals. HorseDeals Prince Attractive is a son of Prima Donna van 't Roosakker, daughter of Kassandra (full sister Kassander), granddaughter of Electra (GP 1.60 with Jos Lansink)!

With Petula DH Z is a daughter of Pegase van 't Ruytershof available out of Stella Dwerse Hagen, Stella is a daughter of Lector vd Bisschop out of Classic Touch DH who jumps 1.55 with Thibeau Spits. Another interesting filly is Wish van Koningsbos out of Eldorado van de Zeshoek TN and Fleur de Kalvarie (Nabab de Reve) who jumped at 1.55m GP level with Olivier Philippaerts. The dam line goes further back to GP mare Dorothee de Kalvarie who was successful with Ludo Philippaerts and gave three 1.60m horses.

Chicky SP Z (by Commil Champ Z), with Lacosta Z as dam, has a half-brother to the 1.50m jumping Capitano Z. The pedigree of the colt HorseDeals Prince Lovely also breathes sport genes. He is a son of Tobago Z out of Notre-Dame van 't Roosakker who herself jumps 1.50m and is a granddaughter of Electra van 't Roosakker (1.60m). From the same dam comes the filly HorseDeals Princess Breath-Taking, with Donthargos as sire.

Out of that other Roosakker topper comes the filly Agaxinne v/d Braembeier that has Aganix du Seigneur as sire and Usha vt Roosakker as granddam.

We also offer you an exceptional opportunity in this May Deals: Le  king blue jara. He is a son of Le Blue Diamond out of the sister of King Edward!

The list of Grand Prix horses in the pedigrees of all these foals is very impressive. Scope, carefulness, soundness and top sport mentality are anchored for many generations.

Of particular interest is also Quibelle van d'Abelendreef, a six-year-old daughter of Cornet Obolensky whose dam line goes back to the 1.60m Baronez (Skippy II). On top Quibelle is in foal to Ermitage Kalone. Finally, there is also the 3-year-old mare out of A Million Dollar and B-Estelle (by Casall) whose mother produced several 1.50 and 1.60 horses that are interesting for both sport and breeding!

The May Deals collection closes tonight from 8pm at www.horsedeals.auction..

Foals to make your mouth water in May Deals collection at HorseDeals
Niels Bruynseels shops at Horsedeals!