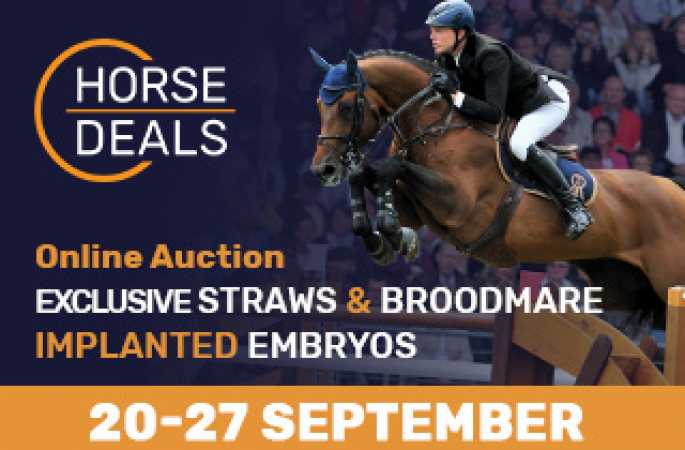 The September Deals came to an end last night. Remarkably, a number of new buyers came forward and managed to get their money's worth. Two Chacco Blue embryos are heading for Slovakia; an expected filly out of the Roosakker dam line for €22,000 and the implanted embryo out of the full sister of Dulhan de la Roque (1.60m) was sold at €20,000.
A large number of bidders went up to €20,000 for the embryo of Dominator Z out of Azuela de Muze who is also the dam of the 1.60m jumping Vedet de Muze and Felini de la Pomme. The latter bid came from Norway.
The other embryos were sold for an average of 14,600 Euro.

The broodmare W Delta Mossel Jantje (Pilgrim x Heartbreaker) has already been successfully used for ICSI after her 1.60 mare career and the buyer from Ireland found that more than convincing enough to offer €22,000 for her.

Among the frozen straws, the original straw by Chacco Blue was again the outlier with 28,000 Euros. Conthargos also did very well with 4800 Euro and this straw goes to Switzerland. The top three is completed by Mylord Carthago where of the forty bids the Dutch buyer managed to secure it for 4325 Euro.
Further customers came from France, Italy, Austria, Hungary, Germany, Great Britain,... were also recorded.

Please note in your calendar that the November Deals will start on November 22nd with a collection of straws and young horses!


1.60m mare in the September Deals