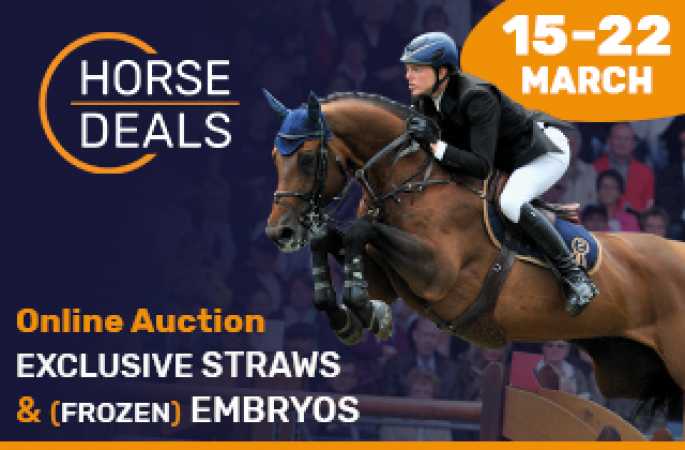 From today, 15 March, you can discover the March Deals collection on www.horsedeals.auction. In the offer of frozen straws Nixon van het Meulenhof, Bisquet Balou, Ampère, Ephebe For Ever and Stedinger are some of the newcomers.
The popular Chacco Blue, Baloubet du Rouet, Chacfly, Diarado and Conthargos are also available again, as are Diamant de Semilly, F-one USA and Mylord Carthago.

The thirteen embryos include 8 frozen and 5 already implanted embryos. Prima Donna van 't Roosakker is represented again, this time in combination with Bacardi or Chacco Blue, or an already implanted out of Chacfly! Prima Donna is out of Kassandra van 't Roosakker who was sold earlier this year for no less than 150.000 euro.
A particularly interesting offer is the expected foal of Bustique x Eros Platière. The stallion Bustique was brought back to Europe because of his good breeding results; despite their still young age, many offspring already jump at 1.50/1.60 level. The mare Ice Baby out of Eros Platière jumps at the highest level herself!
Another double 1.60 combination is on offer with Tobago Z x Andrea. Scuderia 1918 Tobago Z is very successful with Daniel Deusser and the mare Andrea (Marome NW) jumped at 1.60 level, just like her full brother Vampire did under Gert Jan Bruggink.

In this March Deals collection are once again several exceptional 1.60m combinations available! Bids can be made until March 22.