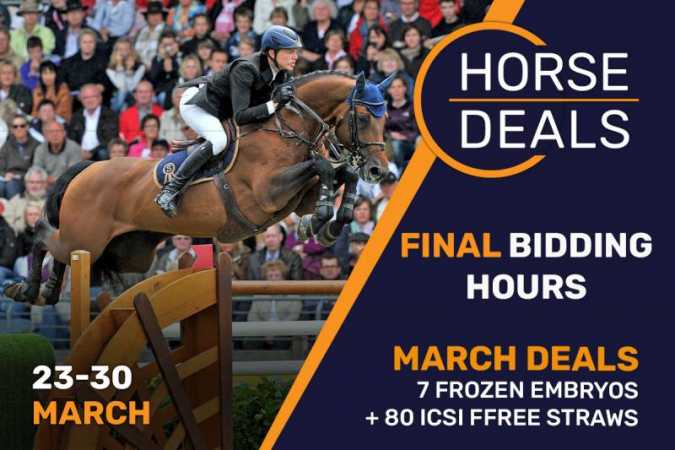 With only a couple of hours left, HorseDeals’ March Deals almost reached their peak. The online offer of HorseDeals ...

With only a couple of hours left, HorseDeals’ March Deals almost reached their peak. The online offer of HorseDeals is once again exceptional with straws of more than 80 legendary sires and 7 frozen embryos with the world’s best genetics.

We offer you straws of more than 80 top stallions, including an original straw of Chacco Blue, but also straws of Balou du Reventon, Conthargos, Diamant de Semilly, Emerald van 't Ruytershof, Kashmir van Schuttersof, Dobel’s Cento and many others are offered.

You are a dressage lovers? No problem, consideration was also given to you with, among others, straws of Sezuan, Sir Donnerhall, Gribaldi, Rousseau, Foundation, Dancier, …

All our straws are completely free to use. They have no terms, so you can use them for ICSI as well.

On top of that we have seven frozen embryos on offer as well, each of which combine the world's best sports genes.

Or how about a Chacco Blue out of Kwasabi van 't Heike (1.40m with Carly Anthony), who is the sister to the five-star Grand Prix horses Fairlight van' t Heike (Alberto Zorzi & Edwina Tops-Alexander ) and Evian van 't Heike (Fabio Sarti)?

Or do you prefer the Cornet du Lys and the Chacco Blue out of Iluna de Muze? With ancestor Fragance de Chalus and 11 of her offspring at the highest level in sport, these embryos are one step ahead.

The March Deals’ final bidding hours have arrived. So it's high time to seal your deal! How? Register online for free, discover the entire collection over here and make your move!

March Deals are running!
Breeders seize their chance at HorseDeals